Why am I writing a new one? Because the Tokyo Sky Tree television tower was opened in Tokyo not so long ago – in May 2012. That is, at the time of my visit, she was only 3 years old. I left Japan at the end of July 2011, so I didn’t manage to visit the Tokyo Sky Tree, at that time I only watched its construction. That is why, during a business trip in 2015, I really wanted to go there.

So, Tokyo Sky Tree is currently the tallest TV tower in the world. And the second tallest building in the world. The Tokyo Sky Tree is located in Tokyo in the Sumida district.
The height of the TV tower together with the antenna is 634 meters. This is almost twice as high as the long-known and popular landmark of Tokyo, Tokyo Tower (its height is easy to remember – 333 meters). It is noteworthy that the height of the new TV tower was chosen in such a way that the numbers: 6 (in the old Japanese “mu”), 3 (“sa”), 4 (“si”) were consonant with “Musashi”. This was the name of the historical area where modern Tokyo is located. Which once again confirms the Japanese passion for numerology 🙂

Construction of the tower began in July 2008 and was completed on February 29, 2012. While the new TV tower was being built, it was called the “New Tokyo Tower”. But from April to May 2008, a competition was held on the Internet and, based on its results, a new name was chosen – “Tokyo Sky Tree”.

The official opening of the Tokyo Sky Tree was on May 22, 2012. Then, on TV and the news, I watched a huge stir and long lines of people who wanted to visit the tower. My students who were still in Tokyo at that time said that they had to reserve tickets months in advance. So, apparently, many Japanese, tourists and guests of the capital wanted to quickly climb the highest TV tower in the world, that the long wait and long queues did not frighten them 🙂

The Tokyo Sky Tree is used for digital television and radio broadcasting, mobile telephones and navigation systems. I draw your attention to the fact that the architects invented and built not just and not only a TV tower, they built a whole city around it, which is called Tokyo Sky Tree Town.

A huge Tokyo Solamachi shopping mall with hundreds of boutiques, a market, restaurants, an aquarium, a planetarium, a theater, cherry trees and red pines are planted in the “heavenly city”. Moreover, this town has two stations on its territory, one of which is called Tokyo Sky Tree.

Some might say that this is a huge Tokyo Sky Tree Town, especially the shopping mall near the Tokyo Sky Tree TV tower is smart marketing, and I think that this is also present, of course. But on the other hand, when various entertainments are concentrated in one place, it is convenient. For example, it is possible that someone will not purposefully go to the oceanarium or planetarium, especially if you understand that it will not take so long to walk and wander inside, then it is not always advisable to drive for about an hour from the other end of the city for the sake of fish.

And it’s a completely different thing when several interesting places and entertainment are in one place: from a trip to just one museum for a couple of hours, visiting a famous landmark turns into a good way to spend the whole day rich and interesting. And by the way, it’s a good place and pastime idea for a date 🙂
The main attraction of the Tokyo Sky Tree tower itself are two observation platforms at a height of 350 and 450, each of which has several floors. From these observation platforms, everyone gets the opportunity to look at the capital Tokyo from a bird’s eye view. From there, the view is truly breathtaking.

The first platform, which we actually visited, is called Tembo Deck. This site is located at an altitude of 350 meters and is made in the form of three separate tiers, each of which, in turn, has panoramic windows.

The topmost tier of the Tembo Deck is made in the form of a circular platform, where there is access to all windows, which allows you to get a full 360-degree panorama. And other tiers are occupied by various restaurants, cafes and souvenir shops, so you can no longer see the full panorama of Tokyo.

And on the lowest tier of Tembo Deck there is something for those who are not afraid of heights and want an adrenaline rush – there are sections of a transparent glass floor.

At an altitude of 450 meters, there is the second site of Tembo Galleria, which can be climbed after purchasing a separate ticket on a separate elevator that runs between the sites. It is believed that this second observation point is the highest observation deck in the world.
But as I mentioned above, I had enough impressions on the first platform, so I didn’t go here (at least this time). Maybe another time when I get a chance to visit Tokyo Sky Tree in the afternoon and check out Tembo Galleria as well. 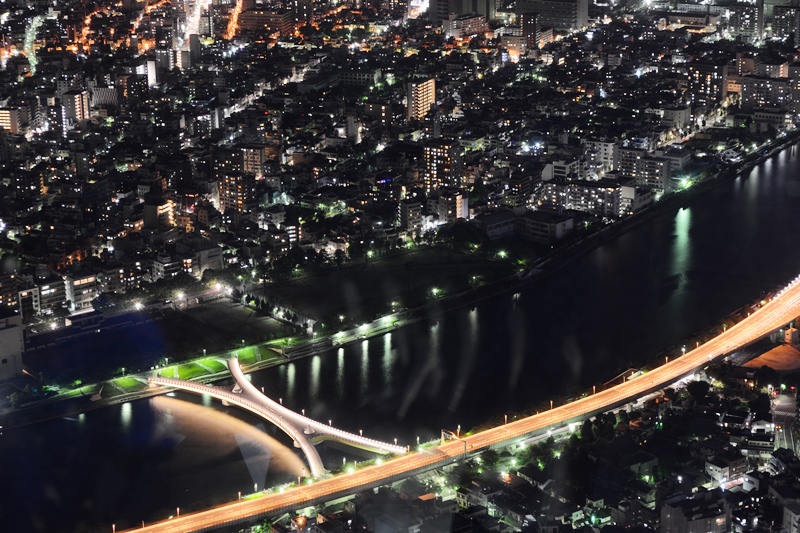 To get to Tokyo Sky Tree, you can take the Tobu SkyTree line to Tokyo Sky Tree Station and the Asakusa, Hanzomon, Keisei Oshiage subway lines. It is convenient to get from Narita Airport via the Keisei line.

And if you are going to visit the Asakusa area and like to walk, then the ideal option is to walk around Tokyo along the Sumidagawa River directly from Asakusa. Do not be afraid, you will not go astray – you will always have a landmark in front of you, which is visible from almost all points of the city – the Tokyo Sky Tree tower itself.
If you have not been to Japan yet, then I hope that you will definitely visit there and see its capital Tokyo and certainly look at the city from a bird’s eye view from the highest TV tower in the world – Tokyo Sky Tree.