I continue the cycle of notes “Japan through the eyes of Alina”.

Today is a wonderful story about Japanese temples that are worth visiting, especially in autumn, when the season of admiring the bright colors of autumn landscapes begins in Japan. I was also lucky to visit 2 of the temples described by Alina in Kamakura: Hasedera and Ofuna Kannon. It is very beautiful and interesting at any time of the year, but the autumn season is charming in its own way. So, let’s get acquainted with the temples that Alina recommends.

” In the last article, I was able to tell you about such a beautiful time of the year as momiji season. According to the forecast for the degree of “reddening” of maple leaves on November 15, 2016, Mount Fuji is gradually approaching the peak of crimson, and in Tokyo, the leaves are just starting to turn into different colors. Since autumn in Japan is an amazing time of the year to walk and enjoy nature, in this article I would like to share with you another place where you can not only feel harmony and unity with the environment, but also have a great time Let’s talk a little about Japanese temples, which are located near Tokyo and fit the phrase “one-day trip.” 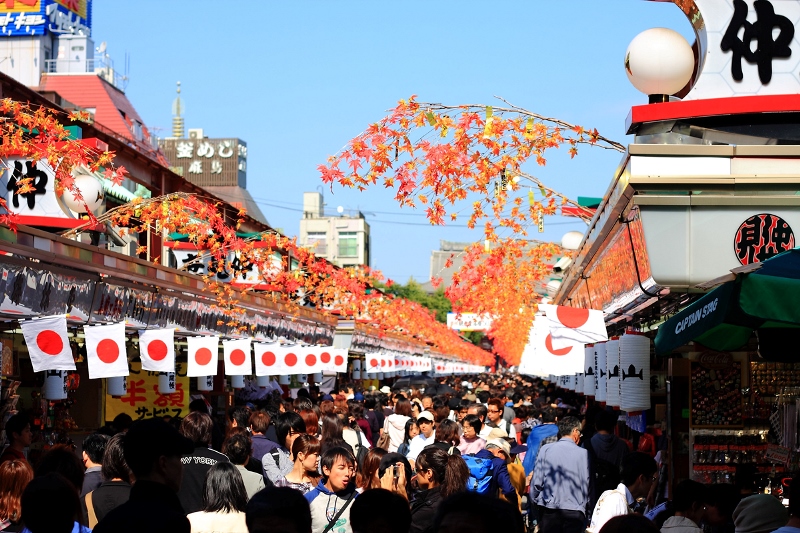 For the first time, I got acquainted with the true concept of a Japanese temple on my first visit to Japan in the summer of 2012. The day after my arrival, my Japanese dad took me to Enoshima Island, a popular place not only among the Japanese, but also among foreign tourists. The Tanabata festival was approaching, and the temple we entered on the way to the Enoshima Lighthouse was decorated with multi-colored paper lanterns, bamboo branches, and other paraphernalia, which made an indelible impression on me. Since then, I have tried to visit as many temples (both Buddhist and Shinto) as possible in order to fully enjoy their atmosphere.

Since we have touched on the southern part of the Kanto region, we will start with the Buddhist temple of Hasedera (Hase-dera), which is located in the city of Kamakura. It is located not very far from Enoshima Island, but the most interesting thing is that you can get to the nearest Hase station to the temple via the Enoshima Dentetsu railway line. The train cars of this line are old Japanese cars from 1957. (or modern trains stylized as retro), but most importantly, the route is laid through the most picturesque suburb and the windows offer stunning views of the surroundings.

So, the temple of Haseder is located in a mountainous area on a vast territory and includes several museums, gardens and an observation deck. Passing through the main gate (entrance fee 300 yen), you immediately find yourself in a huge Japanese garden with picturesque ponds, trimmed bushes and fragrant flowers. Whatever time of the year you get to Hasedera, the garden will meet you with unique flowering plants and stunning landscapes. On the left side of the temple complex is the Benten-do cave (Benten-kutsu), dedicated to the Shinto goddess of luck (especially at sea) and wisdom Benzaiten, the only woman among the Seven Gods of Fortune. At the entrance to the cave, you need to bend down and walk without unbending until you reach the exit. Inside the cave there is a small statue of the goddess, lit by candles, which create a slight twilight and some mystery.

around which there are a huge number of stone figurines-gods of Jizo – the guardians of children’s souls. These stone figurines are depicted with a very sweet expression, and in the autumn-winter period they are dressed in knitted red hats and pinafores, which only adds to their charm. It is worth noting that the statues of Jizo, of different sizes and shapes, are placed throughout the complex.

Admiring nature and climbing up the stone steps, you can get to the temple area, where the main Kannon Hall (Kannon-do) is located, which houses the famous 11-headed statue of Kannon, the goddess of mercy. The statue, 9 meters high (the tallest in Japan), is carved from camphor wood and covered with gold. The 11 heads of the goddess symbolize the stages on the path to enlightenment, and the expressions on their faces mean that the Deity listens to the wishes of various people. It is worth noting that in Japanese mythology there are more gods than goddesses, but the Hasedera temple is different in that it contains shrines dedicated to the female form of the Deities.

It is best to end your walk around the temple at the observation deck, which offers stunning views of the city and the bay. There you can also have a bite to eat in a small restaurant or enjoy Japanese sweets, for example, very tasty dango – mochi balls with different sauces. By the way, if you have planned a trip to Kamakura, be sure to try the buckwheat soba noodles there. According to my research, Kamakura is the place where the most delicious soba is served, whether you choose it hot or cold.